This Grade II listed former private residence, and later college, was constructed in 1854. This substantial building was built with solid 440mm thick red brick elevations. The building, although well-constructed had suffered very severe settlement, most noticeably to the front elevation.

Site investigation undertaken before the commencement of contract works revealed the presence of a substantial swallow hole directly under the building. The extent and profile was determined by carrying out numerous dynamic probe tests and plotting step changes in the bearing capacity of the soil with depth.

Plotting out the shape of the swallow hole could then be compared with the layout of the building; the deepest part being centred on the hall area inside the front door and cellar beneath it.

Stress proceeded to the design stage using the geotechnical data provided by GeoInnovations Ltd. By using the information provided by the site investigation and the loading plan of the structure’s walls and foundations, individual design calculations were carried out for each pile length and profile to ensure that an adequate factor of safety could be achieved.

The main challenge thrown up by this property was twofold. Firstly the structure needed to be supported over a wide range of depths ranging from 2.5m to 12m. Secondly, the treatment had to be carried out within a house with narrow doors, corridors, missing floors, uneven levels and restricted headroom. This precluded the use of a rig or conventional piling methods.

The design criteria for the ReFORCE piles are developed from soil mechanics expressions and can be treated as solid columns. The GeoTek LV being rigid polyurethane both resists creep and has been evaluated as being highly durable and resistant to deterioration. It may also exceed cementitious materials in its durability in certain substrates. In addition, the product functions equally well below water table as above.

The developer was concerned whether the piles could deliver the required capacity to adequately support the various parts of the structure. To provide a direct answer to this question a pile test was organised with two deep piles placed directly over the swallow hole outside the front elevation; one having been grouted to form a 0.5m pile, the other driven to depth, but not grouted.

The pile test on the grouted pile remained static up to 175kN. The un-grouted pile progressively sank under load, demonstrating it had failed. Having established the performance of the test pile over the worst area, the main works were able to proceed.

The superior diameter of the piles provided a surface underneath the foundations on which to bear. The loading plan provided in the SI required varying capacities from the piles in accordance with the spacing and structural load. In every case a very satisfactory margin of safety was provided. 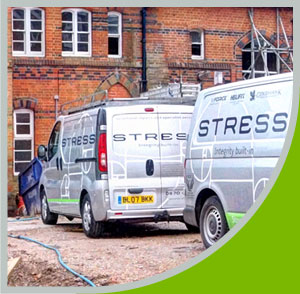 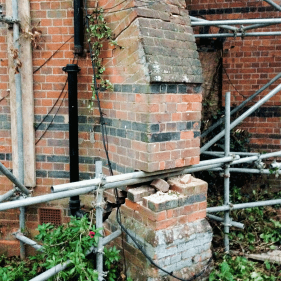 To the right of the front entrance one of the buttresses had dropped by approximately 150mm and similar cracking had extended into the cellar. 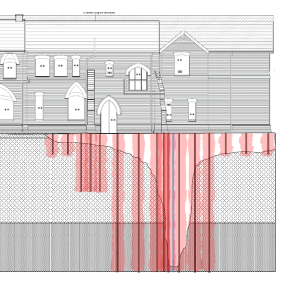 Piles were installed at the previously designated positions around the building to ensure sufficient support was provided for the load bearing walls. 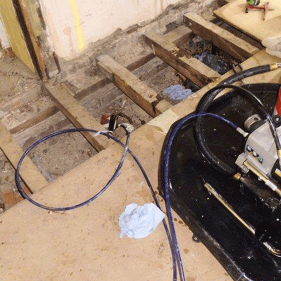 There are a number of advantages using this system. The main of the ReFORCE and Geo4RCE systems is its flexibility as it uses hand portable equipment. 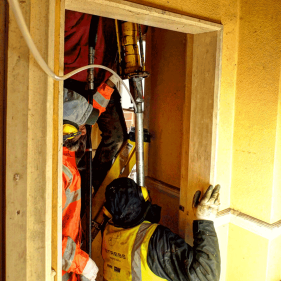 This allowed piles to be formed at all the required locations within the building without compromise.